Under this ancient rune Helen Duncan and her innocent sitters were accused of pretending ‘to exercise or use human conjuration’, that through the agency of Helen Duncan, spirits of deceased dead persons should appear to be present’.

But, lest this single charge may falter, the authorities scoured their dusty law precedents for further charges and they found them. One such was the Larceny Act which accused her of taking money ‘by falsely pretending she was in a position to bring about the appearances of these spirits of deceased persons’.

The prosecution were determined to prove Helen Duncan was a fraud. Her trial took place barely a few months before the famous D-Day landings and lasted for seven grueling days. Spiritualists everywhere were up in arms that one of their most treasured and gifted demonstrators should be treated in such a tawdry manner. A defence fund was quickly raised. It was used to bring witnesses from all over the world to testify to her genuine gifts. Because of this her case rapidly became a cause celebré which attracted daily headlines in tabloid and broadsheets alike.

One telling development that this was no ordinary case was that in a rare example of cross border co-operation both the Law Societies (senior legal bar councils) of England and Scotland jointly and simultaneously declared this case to be a travesty of justice.

As a debunking exercise the case failed miserably. Skeptics must have winced at the daily reporting of case after case where ‘dead’ relatives had materialised and given absolute proof of their continued existence.

One Kathleen McNeill, wife of a Glaswegian forgemaster, told how she has attended such a séance at which her sister appeared. Her sister had died some a few hours previously, after an operation, and news of her death could not have been known. Yet Albert, Helen Duncan’s guide, announced that she had just passed over. And, at a subsequent séance, some years later Mrs. McNeill’s father strode out of the cabinet and came within six feet of her to better display his single eye, a hallmark of his earthly life. 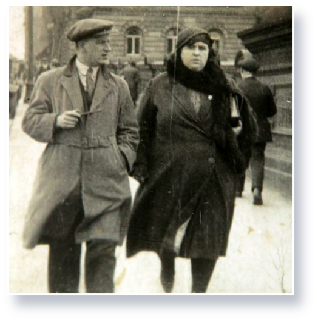 Helen with her husband, Henry.

By the penultimate day of this ridiculous trial, the defence was ready to call their star witness Alfred Dodd, an academic and much respected author of works on Shakespeare’s sonnets. Alfred told the court that during 1932 and 1940 he had been a regular guest at Helen Duncan’s home seance’s.

At one of these sittings his grandfather had materialised, a tall, corpulent man with a bronzed face and smoking cap, hair dressed in his customary donkey-fringe. After speaking with his grandson the spirit then turned to his friend Tom and said; “Look into my face and into my eyes. Ask Alfred to show you my portrait. It is the same man”.

Two equally respected journalists, James Herries and Hannen Swaffer then took their places in the Old Bailey witness box – a place where for hundreds of years many a murderer has given evidence and many a witness has pointed an accusing finger. The chain smoking Swaffer, who had already won acclaim as the acerbic uncrowned father of Fleet Street (home of England’s newspaper quarter) and co-founder of the Spiritualist weekly “Psychic News”, told the court that anyone who described ectoplasm as “butter muslim” would be a child. Under a red light in a séance room it would look yellow or pink whilst these spirit forms all displayed a white appearance”.

James Herries, himself a Justice of the Peace, a much respected psychic investigator of some 20 years standing and the chief reporter of the prestigious and influential “Scotsman” broadsheet affirmed that he had seen Sir Arthur Conan Doyle, famed author of the Sherlock Holmes books, himself materialise at one of Helen Duncan’s seance’s. He had especially noted the distinctive Doyle rounded features, moustache and equally unmistakable gravelly voice.

But, wisely or otherwise, the defence had decided that the best test of Helen Duncan’s genuine gifts were for her to give a demonstration of physical phenomena whilst in trance from the very witness box of England’s Central Criminal Courts. This suggestion really did cause a frightened flurry in the ivory dovecots of the establishment. If she pulled it off, they debated, then instead of the censure they sought, her cause would be spread throughout the land and even beyond. This would mean that the famed British legal system adopted by so many former colonies – including America – would be held to total ridicule.

Hurried conferences with the best legal minds were held throughout the night. Their solution was to reject this offer and suggest instead that Mrs. Duncan be called as a witness – thus giving the prosecution an opportunity to cross examine this ordinary Scottish housewife and, in doing so, attempt to destroy her credibility. But Helen’s defence lawyers saw through this ploy. They pointed out that Mrs. Duncan could not testify since she was in a trance state during these seance’s and could not, therefore, discuss what had transpired.

The jury only took half an hour to reach their verdict; Helen and her co-defendants were found Guilty of conspiracy to contravene that ancient 1735 Witchcraft Act but Not Guilty on all other charges.

Portsmouth’s chief of police then described this new ‘criminal’s’ background. Mrs. Duncan was married to a cabinet maker and had a family of six children ranging from 18-26 and she had been visiting Portsmouth for some five years. He then described her as “an unmitigated humbug and pest” and revealed that in 1941 she had been reported for announcing the loss of one of His Majesty’s ships before the fact had been publicly known.

The presiding judge announced a weekend’s delay whilst he considered sentence. Helen herself left the dock weeping in her broad Scottish dialect; “I never hee’d so mony lies in a’ my life”.

The following monday morning the judge declared that the verdict had not been concerned with whether ‘genuine manifestations of the kind are possible . . .this court has nothing whatever to do with such abstract questions’. However he interpreted the jury’s findings to mean that Helen Duncan had been involved in plain dishonesty and for this reason he therefore sentenced her to nine months imprisonment.